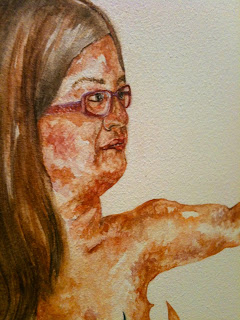 The term “la gancha” or “the hook,” typically refers to women who are used in organized drug trafficking to lure male victims. In La Gancha 1 & 2, Rosemary Meza-Desplas removes the veil of glamour often draped over images of female criminals. Floating against a white backdrop, female figures seem to emerge from flame decals, wielding weapons in their outstretched hands.

Consistent with Meza-Desplas’s approach to figures, she strips their bodies of the glossy veneer that camouflages the realness of the female form. As delicate as the stippled watercolors that compose their features, these women are disarming gun slingers. Subtle displays of age - sagging skin, crow’s feet, spectacles - reveal life and complexity. Meza-Desplas takes the concept of the la gancha and re-humanizes her; allowing a new image to emerge from the flames like a phoenix.

Get your fix at ARC today and tomorrow only!

Posted by ARCviews-news at 5:20 PM